At the last company I worked for (which was Indeed and I was contracted via Upwork), I worked with the team in charge of Raven. Raven is a self-service portal for sending emails to different users of Indeed.com.

I was tasked with validating 10 tickets and finding the one with the greatest return on value. My process was to talk to super users and see what they think (also because the product manager was not there and I had to make the call). The Digital Marketing Managers were our biggest users. Their biggest pain point was not being able to send to a target audience on their own. They had to send a request to a single person to create a PRESTO SQL query, and then they could send it. This single person had on their board at least 20 tickets open at any time. It was soooo slow.

In short, not having the ability to create an audience without code bogged down their workflow.

In order to perform well on their jobs, these are the things they have to do:

I had audience targeting UI’s in Facebook, Instagram, and Twitter to promote my small webcomic so my starting point was to take those options. Then, as it progressed and I was able to educate the product manager of how quickly and simply we could make a form with only 5 inputs and count it as an audience builder, his mind got opened to a world of possibilities. He wanted to take account of everything.

I already knew from past experiences you try to account for everything, UX takes a dive, so, the design process is trying to educate the team on designing for 80% and then handling the complex cases another way, maybe through that one guy who already does this.

The product managers I worked with had this project in their backlog for over a year. They had said this was important, but for some reason, they were stuck and kept pushing it off. Meanwhile, our end users kept wondering why this really important feature was not being put in the software. I found out later the Product managers had no idea when it comes to web development and thought I was an idiot. So, in addition to designing, I had to educate them on web technologies and even coding things myself.

I took some simple fields that the super users had asked for and wireframed a UI with Bootstrap. I had presented this to some end users and got their feedback to improve. The goal was that the form would insert in the variable values into a series of strings which would then be combined to create a SQL query. In short, this is a string generator.

User Test Given: Create a Typical Audience with the inputs given.

After the discussion with the Product manager that the 1st iteration could be made in a week and that I’d already made the UI, he started to understand that this wasn’t as impossible to figure out. I explained to him, based on how vague the ticket is currently, this solution I’ve provided fits what the ticket says it needs. If he wanted something else, the requirements should be revisited.

He didn’t think he had to write the requirements, so I made a more detailed version. 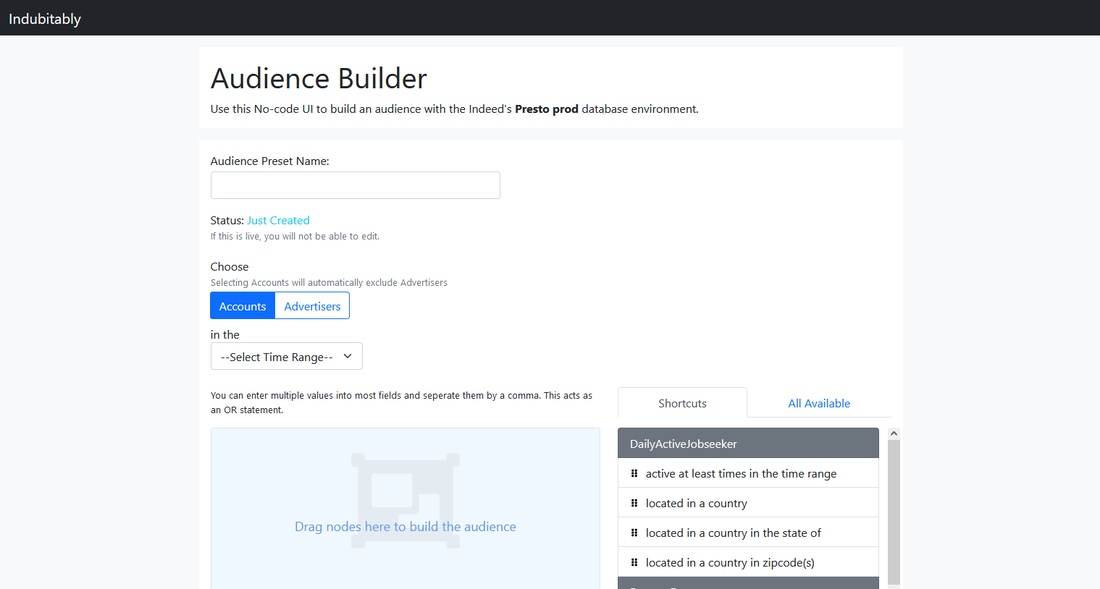 User Test Given: Create an audience that is targeted towards Nurses in the US.

This iteration was loved by our end user team. This Bootstrap wireframe had all their common queries and a way to add more fields based on whatever was available in the PRESTO environment. It still was a just a string generator, but the most common fields were listed as shortcuts. This UI also could be saved and tweaked and inserted into the campaign page itself.

The product manager worried that the shortcuts would just keep being added and said that was a waste. He didn’t see an aggregation pipeline. I’m pretty sure the end users just wanted to keep it to just “match” on certain fields.

This part of the exploration then dived into a “Build vs. Buy” analysis.

I worked with a front-end developer to create presentation materials, proposals, and designs for the Build vs. Buy comparison. Given the way the Product manager was headed, it seemed easier just to buy. Still, I created some mockups so that the developer wouldn’t have to create the UI just to show.

Note: I created the mockups and prototypes in Figma, which are all owned by the company account that I no longer have access to. So instead, here are some of the mockups I created. 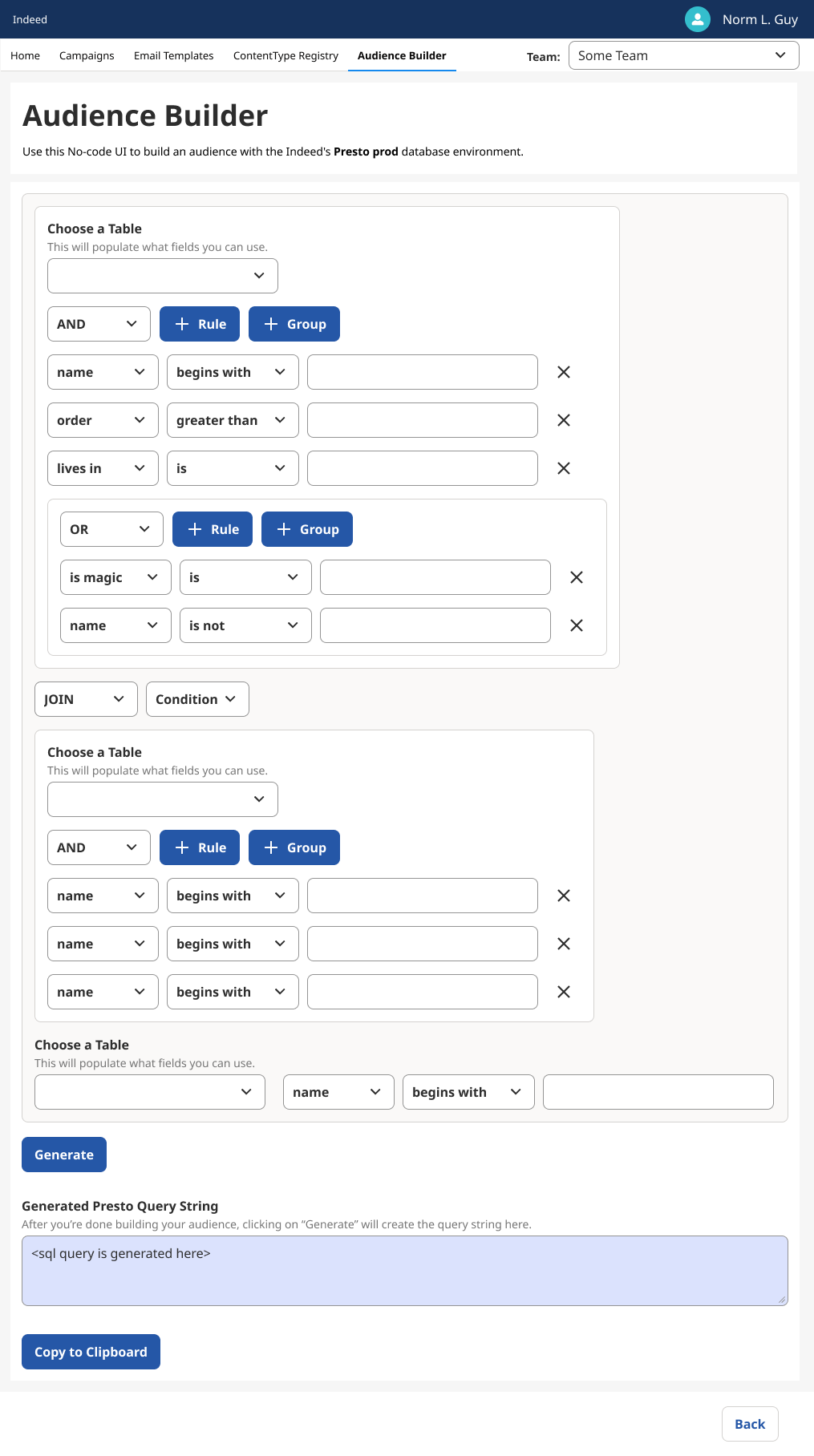 This is the UI for the no-code Audience Builder. 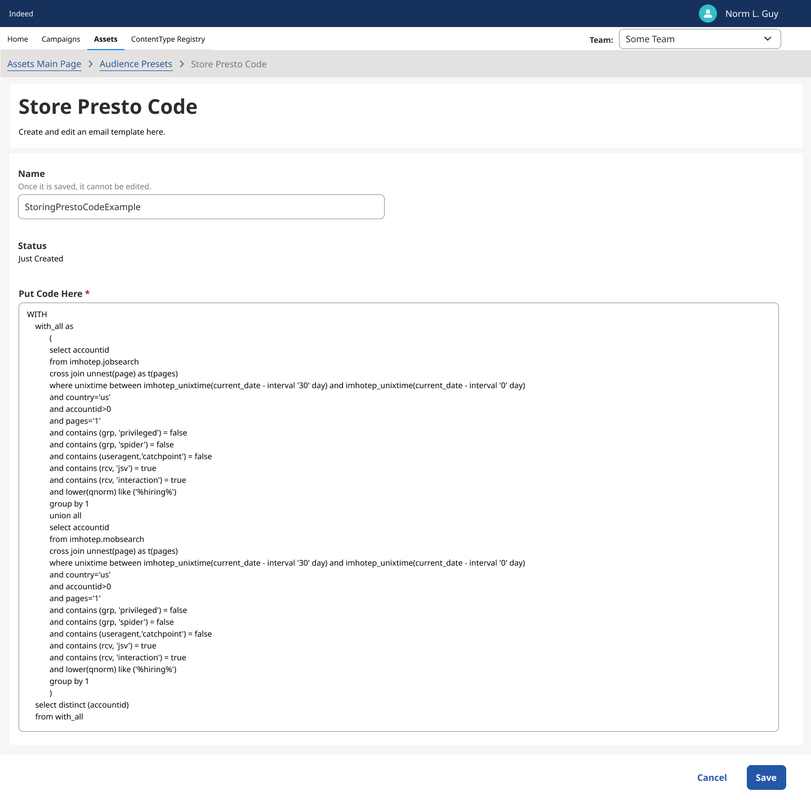 Sometimes, you will need to store complex queries, so this was a simple UI to do that.
Powered by